Changing the Way We "Feel" About Mental Illness

What If Physical Diseases Were Treated Like Mental Illnesses?

As many as one out of four Americans suffer from at least one type of mental illness. What's more, one in six adults will admit to having a mental disorder this week alone. It's safe to say we have an issue with mental illness in this country; an issue that remains largely ignored.

If millions of Americans suffer from a mental illness, why is so much suffering falling on deaf ears?

Unfortunately, the way we (the American people) perceive and stigmatize mental illness is mostly to blame for our lack of concern on the matter. Instead of treating mental illness as the disease it is, we look down upon those who are afflicted or even make light of their situation. Or worse, we completely ignore their condition altogether because it makes us uncomfortable.

The treatment of mental illness -or lack thereof- is utterly disgraceful in this country. Our ignorant persecution and mistreatment of those afflicted by mental illness is a contributing factor as to why our nation has failed and alienated tens of millions of its suffering people. It almost goes without saying, it's time Americans change the way we think, treat and pay attention to those suffering from a mental illness.

Today, the World Health Organization (WHO) is taking it upon themselves to change the way our nation looks at mental health by constantly working to educate people on how to approach mental health disorders.

October 10, is the WHO's World Mental Health day. The organization uses this day to address and correct the enormous amount of misinformation that is out there regarding mental illness. Additionally, WHO remains dedicated to challenging the misconceptions that prevent millions of people from talking about their mental illness.

One of the misconceptions WHO aims to tackle is the falsehood that says mental illness is a lack of strength or willpower of those who suffer. The organization argues that we would treat mental illnesses a lot differently if they were visible like that of physical ailments.

The organization uses a clever cartoon illustrated by Robert Hugs to further illustrate their point: 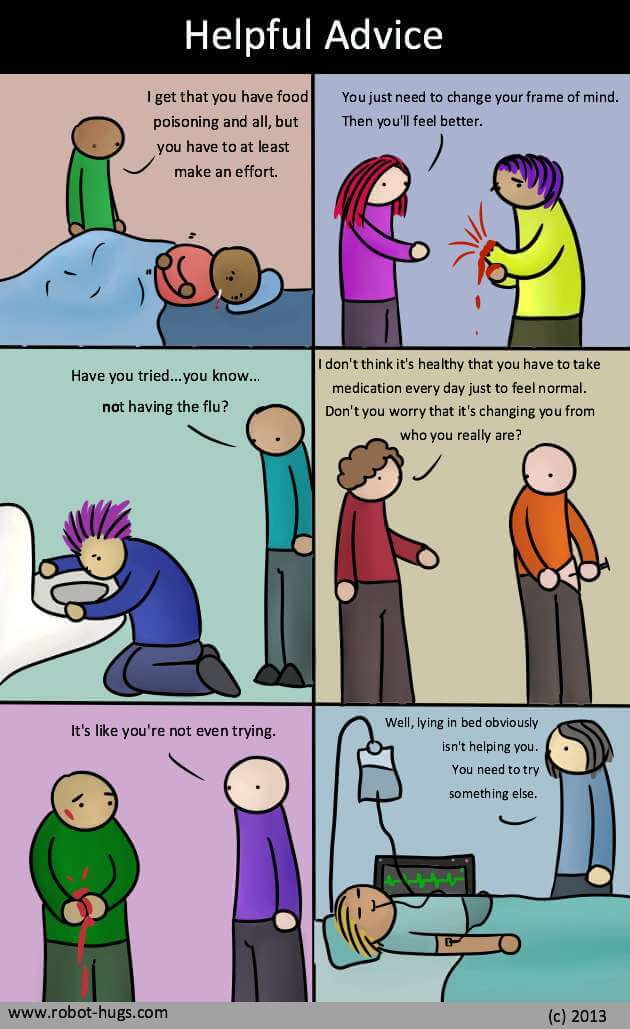 WHO states that mental health doesn't discriminate and can affect people from all different walks of life. Celebrities, children, parents, CEO's, athletes, coaches, world leaders and even you, can be affected by the debilitating disorders of a mental illness.

It's time we finally put stereotypes surrounding mental illness to bed. We don't need to be directly affected by mental illness in order to empathize with those who suffer.