Shayne Gallagher Helps a Family on the Dr Phil Show

Maria and Troy claim their life is full of yelling, screaming and raging acts of violence caused by their “disrespectful, out-of-control,” 16-year-old daughter.

The parents say their daughter started smoking when she was 10, sneaking out the house when she was 11 and by the time she turned 14, they say they were at their wits’ end and sent her to a boarding school for children in crisis. It didn't work - after 17 months at the therapeutic boarding school she returned home twice as rebellious and totally out of control.

Shayne Gallagher, Executive Director of Wingate Wilderness Therapy stepped up to the plate and teamed with Dr. Phil to offer a solution for this family in crisis. Watch the videos below to see the "unexpected outcome"!

Their daughter insists she’s not a bad kid, that she’s just a normal teenager. She says she loves her parents — but that they need to step up and be better parents and spend more time with their kids.

The parents asked the show for help by giving their daughter the opportunity to speak with Dr. Phil -- find out what happened that shocked everyone. Can Dr. Phil help these parents regain control of their daughter? You have to see watch the videos to find out.

Click on the image below to see all four short video segments. 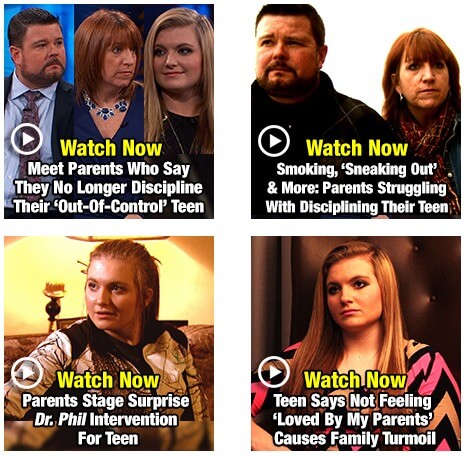