Harnaam Kaur is a lovely young woman from England, with dark skin and dark eyes. She uses mascara on her thick lashes and wraps herself in an Indian robe to...

Harnaam Kaur is a lovely young woman from England, with dark skin and dark eyes. She uses mascara on her thick lashes and wraps herself in an Indian robe to pose for the picture that will feature her in London’s beard fest. Because even though Harnaam is a 22-year-old female, she has a full, dark-haired beard.

Harnaam was diagnosed with polycystic ovarian syndrome, which affects her hormones. As a child, Harnaam was constantly made fun of for her facial hair. She would wax and shave it constantly, but the taunts continued. Hurt and discouraged, Harnaam began cutting herself to deal with the pain.

As she grew, Harnaam became tired of the constant upkeep for her appearance—an appearance, she felt, that was being dictated by everyone around her and didn’t at all reflect who she really was. Now, she says, she is being authentic—and doesn’t care what anyone else thinks. 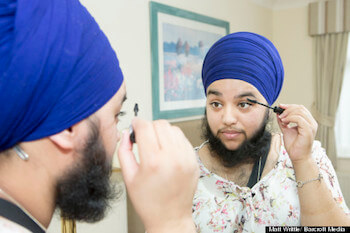 And she has. Harnaam is part of Beard Season, a foundation to raise money and awareness for melanoma in children. Photographer Brock Elbank is very impressed with Harnaam and said to Huffington Post, "To have her on board is such an exciting prospect for us. I like the fact that she has embraced having a beard and she’s very striking with it. She’s a really great girl and she told us her story and we loved her positivity."

It’s a positivity that will do well for her and others. Harnaam is happy and confident, thrilled to finally feel like she can be accepted, that she needn’t try to hide her face, or her beautiful smile. She hopes that by doing so, she can help others accept that they are beautiful for just being who they are.

"All that matters to me at the moment is that I love myself," she said happily. "I love my beard and all my other little quirks—my tattoos, my scars, stretch marks and blemishes. I want other women to find the strength that I have. If I had any message it would be to live the way you want—it’s your journey and it’s your life."