Before I came to WinGate, I was stuck. Stuck in my parent’s house. Stuck on their couch. Stuck in front of the TV. Stuck to my bong. Stuck in a fog.... 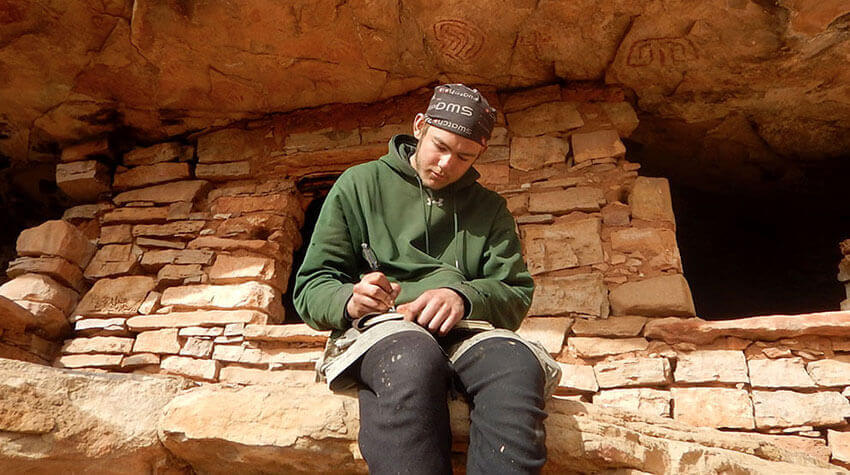 Before I came to WinGate, I was stuck. Stuck in my parent’s house. Stuck on their couch. Stuck in front of the TV. Stuck to my bong. Stuck in a fog. My choices were to get “tossed out on my ear” as my dad liked to say—no couch, no TV, no bong, no money—or go to WinGate. So I reluctantly agreed.

My dad and I flew to Utah and then rented a car and drove to Kanab. It was a long trip because we live in Massachusetts. We stayed in a hotel that night and got up ridiculously early to meet the WinGate staff. The whole trip—almost 24 hours—I didn't say a word to my dad. Why start now, I figured. I just stared at my iPad screen. When we got to WinGate they took that away. I was already uncomfortable, out of my element, and really annoyed. And we weren't even in the wilderness yet.

Once the program started, I felt regret about agreeing to go. Maybe I should have just sat on the couch. I knew my parents wouldn't have had the heart, or the strength, to physically pick me up and throw me out. I was pretty heavy at the time and they are kind of old and don't like drama. It was only a couple days in and already I was really uncomfortable with the whole wilderness therapy thing.

Fast forward a couple of weeks and it was still not going well. No couch. No computer. No TV. No Captain Crunch. No weed. An all this talking and hiking. I was getting really, really annoyed. Partway through a two-mile hike we took a break to eat and rest. Then it was time to start hiking again. I was sitting on a big rock and the sun was warm and kind of melting me into the rock.

So when John—who smiled way too much, I thought at the time—told us it was time to go, I just sat there with my butt melted to the rock. As far as I was concerned, I was going to sit on that rock forever.

“I’m not hiking,” I said to John. I just sat there and waited for his reaction.

But a weird thing happened…absolutely nothing. Nobody tried to make me hike. There was no guilt tripping, no bribes with candy bars (though I kind of would have liked that), no group consequences, no yelling. Smiley John just looked at me. “Okay, Jake,” he said and walked over to where everybody else was getting ready to hike again.

Without saying anything about me or my rock sitting, he casually changed the whole plan. “Who’s up for some ultimate Frisbee?” he shouted to everyone. I just sat there and everybody else played Frisbee.

After a while the rock wasn't so comfortable anymore. It was just hard. My once warmly melted butt started hurting and I was bored. But I was not budging unless it was to go home. Maybe an hour later (it felt like ten) John walked up and plunked down next to me. I figured he was finally ready to negotiate. But that’s not why he was there. He said he was tired from Frisbee and needed a break. First we just sat there and watched everybody. Then he’d comment on people’s Frisbee throwing style—“see how it curves left—his arm wasn't straight and he didn't follow through. Gotta’ follow through in ultimate.”

Then he asked me what I might be doing if I were back at home. We talked about our favorite video games—Dark Souls for me and Forza Motorsports for him. Just chit chat. I have to admit, this guy John was a pretty good conversationalist. He could have a conversation with a rock. Or at least with an unhappy guy on a rock. We didn't talk at all about me not hiking. But he did finally ask me a sort of related question.

When he asked that question it was like a fog suddenly cleared and I could see my life—all of it, all at once—me as a cute little kid playing outdoors, camping with my dad, then getting teased in middle school, turning quiet, quitting college after one semester, coming home, disappearing into that stupid couch, getting stuck. Just stuck. I didn't say anything for a while.

John gave my shoulder a little squeeze. “I’m gonna get back in the game now,” he said and jogged back to the group. After a while I got up too and I started moving. I haven’t stopped since. No more couch. No more gaming. No more bong hits. Less TV. I still eat Captain Crunch. I’m in college now, living on campus in a dorm, 30 pounds lighter, 3.5 GPA, girlfriend. I even call my dad every week or so and we manage to have something resembling a real conversation. Crazy.

What I learned at WinGate is that sometimes you just have to get off the rock. I’m glad I did.